YMWW #23-A: California Chronicles, Part I

Part I: Back in Town

After an uneventful, five-hour flight, I was finally back in the Bay Area.  (Edit: I say “uneventful” like a bad thing, but it occurs to me that “eventful” flights usually mean catastrophe.  This flight was perfect.)  My parents picked me up at SFO, but seeing as it was past nine o’clock and near their bedtime, we skipped the restaurants and went straight home to Livermore.  After a meal of leftover ribs and rice, I gravitated towards the digital cable and 60-inch HD TV and got caught up on Entourage.  One hour into my vacation and I was already playing couch potato.

‘Round about one in the morning, my good friend Ian came by to pick me up.  Everything was closed by this hour, like any decent suburb, so we drove around just to drive around.  He pointed out a few new additions to Downtown Livermore—such as the newly-expanded First Street Ale House, the type of pub-slash-restaurant prevelent in Berkeley but lacking in Honolulu—but for the most part, the city entire was just as I’d left it.  Still, we drove.

We drove and we didn’t stop talking.  The conversation was continuous and seemlessly slipped from one topic to the next.  We discussed everything from girl problems to the possible city infrastructure of San Jose.  Before we knew it, it was three o’clock in the morning by the time he took me back to my place.  The car stopped in my driveway, but the conversation did not.  It was not until an hour and a half later did I finally head upstairs to go to sleep.

I took that first night of shooting the breeze in a car with my friend as a good omen, a foreshadowing of the fun, easy time we will have during our roadtrip around the country.  I will go into detail of this later, but basically, Ian and I plan to drive around the continental United States for an entire summer next year, starting in the Bay Area, going up through the Pacific Northwest and then across the northern states, working our way down all the essential cities of the East Coast into Florida, and then back through the South.  The theme of the trip (besides avoiding Middle America) is frugality; we will couchsurf, crash in the car, or camp before considering a hostel, our last resort.  Seeing as three hours flew by during our tour of Livermore, I truly believe our roadtrip will go off without a hitch.  Well, without many hitches.

Ian picked me up the next morning for more car-wandering.  This time it wasn’t as aimless; our plan was to drive up the Peninsula for the sake of crossing the Golden Gate Bridge.  Before heading out, Ian and I stopped at Safeway to buy ingredients for a pack lunch.  We spent about half an hour deciding between this sandwich and that before realizing we were both already hungry.  We ditched Safeway for hot food and beer at First Street Ale House.  I love that kind of spontaneous decision-making.  I live that kind of spontaneous decision-making.

Bellies full, the two of us continued on our trip up the Peninsula.  It was a comfort to once again see familiar golden hills, wide open spaces, and highways that made sense.  When we reached the Bridge, I whipped out my camera and started snapping away like a tourist.  It was narrower than I remember, but than again, I don’t really remember the one other time I crossed the Bridge.  I guess it was narrower than I expected.  Shorter, too.  I’ve found monuments are usually smaller in real life than in pictures and expectations.  Still, the familiar orange towers shrouded by grey fog forced a giant smile upon my face.  We pulled around to Vista Point on the other end so I could take an unnecessary amount of same-angle pictures of the Frisco icon.  Dressed in shorts, slippers (read: “flip flops” in CA), and a zipped-up hoodie, I fully indulged my Hawaiian tourist persona.

Fifty pictures later, Ian dropped me off in Berkeley so I could meet up with my friend Olivia, who just happened to have the day off.  I hadn’t seen Olivia in a year, but we quickly got caught up on what we’ve been doing since graduating.  Basically, nothing.  We were both too proud about it, too.

Olivia and I made all the necessary Berkeley stops: Upper Playground, Rasputin, Brazil Cafe, Beckett’s, spending money we didn’t have on things we shouldn’t have bought.  Along the way, we met up with my friend Ben who also—surprise, surprise—was working entry-level jobs solely to pay rent.  There the three of us sat: Berkeley graduates.  Minimum-wage warriors.  Twenty-somethings with uncertain futures but no worries about them.  We should be the poster-children on the post-recession University of California brochures.  Go Bears! 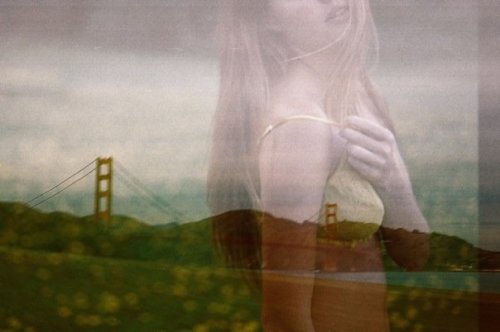 Another beautiful double-exposure photo from my friend Daeja Fallas (www.daejafallas.com) feature the one and only Golden Gate Bridge

2 responses to “YMWW #23-A: California Chronicles, Part I”