California Chronicles: Part III—Around the Bay and Beyond

Camp officially ended around noon on Sunday, so I still had half that day plus the following three to see as many people in as many places as I could before leaving.  I slept almost the entire drive back home.  The power nap came in handy, as not long after I dropped my duffle of dirty clothes in the laundry room, my parents and I took off for San Francisco.  We were going to meet my sister and her boyfriend Amit at the Bubba Gump’s at Pier 39.  You’d think I’d want to take a break from that place during my time off, but my motive was two-fold: I wanted to see how easy it would be to try out my employee discount at another location, and a family dinner was my mom’s belated birthday gift, so it might as well be a half-priced dinner.  Fifty bucks for dinner for five ain’t bad at all.

After finding a sweet shirt at the market (a black retro tee my coworkers envy), we took our seat at a corner booth near the front.  Sitting in a different Bubba’s is a strange experience; everything is completely brand new yet strangely familiar at the same time.  I was in a parallel universe.

I’d told my family to not let the server know I was an employee because I wanted to see how his service compared to that at my location.  At first, I wasn’t impressed.  He came around half as often as I do, and didn’t start trivia until we asked.  I later found out that he was the bartender as well, so I forgave him.  Also, he had some good trivia questions.  When he realized I wasn’t answering until the questions were too hard for my dad and sister, he figured out that I was an employee.  He gave me the discount without asking for proof, and I gave him twenty percent, base rate for a server-to-server tip.

My sister and me at Bubba Gump's in San Francisco

One half day in Berkeley was not enough, so I woke up Monday morning and hopped on BART to the Downtown Berkeley station on Shattuck.  First, I met up with Bianca and had pizza and beer at Jupiter’s.  Wait, I need to emphasize that: I had gourmet, brick oven pizza and locally-brewed beer at one of my favorite ale houses in Berkeley.  I was in heaven, and with good company.  Bianca, a fellow UC Berkeley Film Studies graduate, also works an entry-level job at a museum.  We met up with Nate afterwards, who graduated a year before me and is still on the job hunt.  Every friend I meet makes me feel better about my post-graduate situation, but worse about the trend in general.  At least we’re all in it together!

Two friends in tow, I headed to campus and met up with two more, Felicity and Taylor.  They’re still in school, so they’re all bright-eyed and hopeful about the future.  Just they wait.  We strolled through our lovely Alma Mater and past Memorial Stadium because I wanted to see the construction progress on the soon-to-be Student High Peformance Athletic Center.  Not much progress since I left, as expected.

After a quick bite at Gypsy’s, we dropped Bianca off at BART and explored a bit of North Berkeley.  For those unfamiliar with the area, North Berkeley is nice Berkeley.  It’s a clean, high-brow neighborhood home to more professors and less panhandlers.  In true North Berkeley style, we made our last stop a tea house terrace.  The weather was perfect, the tea was tasty, and we had a fun time pretending to be sophisticated.

I returned to Livermore that night in time for my childhood friend Matt’s 24th birthday party at none other than First Street Ale House.  The room was filled with a few familiar faces—namely Tasha, Casey, Justin, and Anna—but mostly strangers.  This was the social circle Matt developed over the past five years, and while he has these people and I have my college and Hawaii friends, we still came together like high school was yesterday.  He’s still the same old silly, caring, goofy, honest Matt with whom I grew up.  I hope I haven’t changed too much. 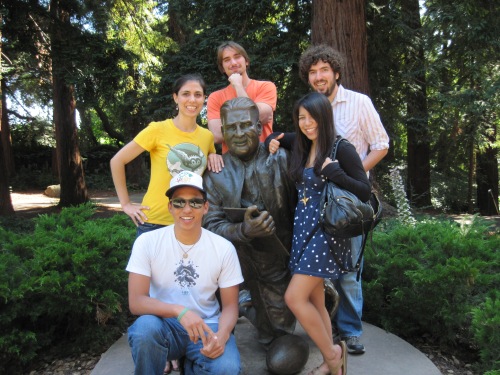 Bianca, Taylor, Nate, Felicity, and me around the Pappy Statue at UC Berkeley

I had known before I left Hawaii that I was going to spend significant time in Sacramento, not only because my sister lived there, but also (and mainly) because that’s where my college roommate Jake moved to after we graduated.  Jake, Lawrence, and I shared the same small living spaces for four years, and now we reside in three different time zones.  While I couldn’t take a detour to Chicago to visit Lawrence, I did have the opportunity to see Jake again, and I was definitely going to take it.  Jake joined my family for dinner at a classy beer and pizza place (notice a trend?) and then we attempted to catch an early screening of Scott Pilgrim vs. The World.  Although he won the tickets from the radio, they oversold the screening and we got there too late.  No worries though, the theater was a short walk from Old Sacramento and Jake’s new place of employment on the Delta King, a hotel-slash-restaurant on a boat.

My old friend gave me a tour of the boat and of Old Sac.  It’s an interesting little town, but not as interesting as the conversations we had, about anything and everything, as usual.  Jake and I operate on the same brainwaves, no pretenses, no social walls, no awkward silences.  It was refreshing.  Too bad Lawrence couldn’t be there.

I got to see the apartment he lives in with his longtime girlfriend, Jessi.  It was definitely cleaner than our digs in Berkeley, and was furnished with a giant TV and two awesome cats.  After joining my sister and her friends for a couple drinks downtown, he took me to a bar across the street from his place and we split a pitcher of beer over foosball and pool.  A simple good time with a simply great friend.

Jake, Jessi, and their two cats--Lucius Vorenus and Niobe--in their Sacramento apartment

I spent the night on Jake and Jessi’s couch, falling asleep to TMNT.  We finished the Ninja Turtles movie the next morning and then went out for breakfast.  There are never sad goodbyes with Jake and I, just see-you-laters.  And I will.  Hell, he’s half-serious about moving to Seattle when I do.

I had plans to see some friends in San Francisco, but seeing as I was so close to Lotus, my dad suggested I first stop by there to see my grandma.  Lotus is about an hour northeast of Sac, but two hours back to Livermore.  Still, I went.

When I got there, it was only grandma, Uncle Junior, and Auntie Tessy.  I saw “only” because I’m used to that house filled with ten to eighty people.  It was like visiting an amusement park during the offseason.  My auntie and uncle were glad to see me and asked me tons of questions while forcing me to eat.  I declined food four or five times before giving in.  It’s hard to say no when your relative is already making you a plate.

The house is in a constant state of renovation, and besides a well-tended garden, the newest additions to the Lotus house were a poolside bamboo nipa hut and matching tiki bar.  Our family parties are going to amazing!

The Nipa Hut and Tiki Bar at our house in Lotus

After about an hour of eating unnecessarily and watching Filipino game shows, I headed back to Livermore, took a shower, and drove to the BART station to catch a train to the Mission District.  When I got there, my friend Juliana was finishing up work and Nate was still on his way over, so I had some time to just wander around the Mission solo for a bit.  I’d never really explored this area beyond the taquerias, but got excited as I imagined myself living there in five to ten years.  It’s an interesting neighborhood filled with impressive street art, small bars, and an abundance of Mexican restaurants.  I put it on my “to move to” list

I finally met up with my friends at Juliana’s super nice, very San Francisco-y house, and by that I mean a house that looks tall and small in the front, but extends quite far back.  We had some Mission Mexican food while I ranted about Hawaii’s problems (namely, how it lacks a rail system, recycling programs, and available girls).  I love the island, but not as much as complaining about it in front of people who so desperately want to go.  My ranting quieted a bit when my torta al pastor came out.  It wasn’t as good as what I scarfed down daily in Mexico, but it was far better than anything I could find in Hawaii (another thing it’s lacking).

Nate and I hit a bar for a bit to give Juliana some time to study as she’s one of my few friends that actually does school work.  She still hasn’t learned the art of studying just enough to BS your way through a class.  She must have graduated from Berkeley the hard way.  By the time we got back to her house, Juliana was ready for a break, so we played Clue.  Board games are such simple pleasures; I don’t know why people don’t play as often.  A few hours and YouTube videos later, Juliana was ready for more reading so Nate and I headed back to our respective homes.  We said our goodbyes and took off into the night. 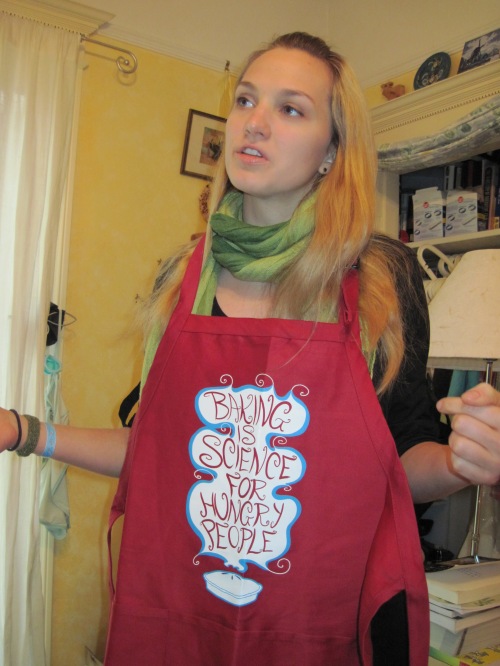 Juliana shows off her awesome apron in her San Francisco house

Revisiting California was a refreshing break from monotony.  I soaked in my ability to recycle, to wear jackets, to drive 80+ miles per hour.  As I left those things behind, I took with me the knowledge that no matter how far I move or for how long, I will always have friends and family in Califoria ready to welcome me back home, hopefully over some pizza and beer.

Sigh, I guess it was time to leave California and come back to this. . .