First of all, I hope you had a happy Halloween.  I know I did; lots of libations, buddies, and crazy crowds everywhere.  My relatively obscure Captain Hammer costume was recognized by only four other people, one of whom was also Captain Hammer.  I liked it that way; the less people that recognize you, the more awesome it is when one does.

But this isn’t a post about Halloween.  This is a post about the week before and how tremendously bipolar it was.  One day of amazing activity was followed by another of complete boredom, only to be followed with more awesome.  It went back and forth like that for a while, hills and valleys.  Let’s start with Wednesday. . .

My Wednesday began before the sun rose.  A phone call from my friend Ernie woke me up around 4:30.  I gladly jumped in his car and we took off toward the other side of the island.  Now, what could possibly motivate me to whisk away in the early day?  Stairway to Heaven. 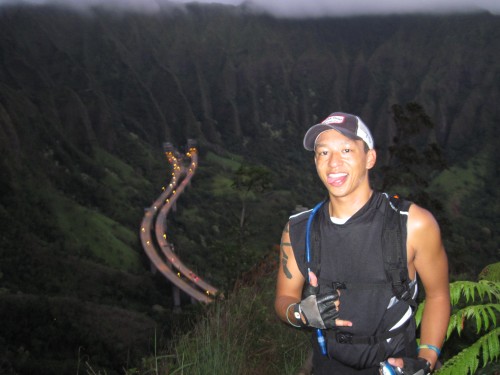 Not even halfway to the top and look how high we are!

That’s right, sirs and ma’ams, I finally had the opportunity to check off one of the biggest items from my Hawaii Bucket List.  The adventure started off a little rocky, in that the only entrance we knew about was a small hole above the locked gate in a chained link fence.  The fence was at the end of a quiet residential street.  Ernie climbed over and through first, causing all the dogs on that street to start barking.  Great.  Now, not only did I have to climb over, too, but I had to do it while the dogs and a few neighbors were aware of our activity.  I’d love to say I slipped through like a ninja and stole away into the darkness.  Instead, my shorts got caught in the fence.  There I was sitting, wiggling, waiting for some angry neighbor to pull me down.  Fortunately, after what seemed like five minutes, I managed to break free before anyone came over.  All it cost me was a hole in my shorts.

After that, it was relatively smooth sailing.  We climbed over and under two more fences before we found the bottom of the stairs.  We eventually ascended above the highway.  I kept turning around to stare at the trail of headlights snaking through the mountain.  It was beautiful.  The higher we climbed, the brighter it got, as if the sun was trying to keep with us.  After a while, we couldn’t even see the highway anymore.  Then it got to the point where we couldn’t see much of anything; we literally walked into the clouds.  Visibility dropped to about thirty feet.  All that existed was the immediate next flight of stairs.  And yourself.

There were several platforms along the way, each one looking like the end of the hike until we reached it and discovered more flights of stairs.  It reminded me of the movie Return of the King: multiple times you think it’s about to end, but it just keeps going.  There was one platform that had an abandoned building and I thought for sure we had reached the top. . . until we found a horizontal walkway in the back that kind of curved around the peak.  There waiting for us were more steep flights of stairs.

There was another abandoned building at the real top of the hike.  It felt like I was in a different world.  When you’re face to face with clouds, you see how fast they really move.  For one brief moment, the clouds opened up and we could see all the way down to the coast.  I could have been Zeus at that moment.

Shortly after arriving, two more groups of hikers reached the top.  They were all super friendly.  That’s one of the things I love about hiking: you automatically have a bond between anyone you run into and it’s never weird to immediately strike up a conversation.  We actually hiked the entire way down with one of the groups, a threesome consisting of a young guy, his sister, and her friend.  He lives here now, but is originally from Seattle.  The two girls were visiting.  I took our meeting as another sign to move to Seattle.  Oh, and remember those fences we climbed over on the way up?  They showed us how to walk around them. . .

We all reached the bottom before noon.  BEFORE NOON!  How could I explore so much and still have more than half the day to burn?!  It was crazy.  The rest of the day included lunch at Bubba Gump’s (big meal, cheap price) and then a hospital waiting room.  Ernie had trouble coming down from the roof of the building at the top of the hike and busted his knee open.  He actually descended the whole way down using the handrails more than the stairs.  Needless to say, most of his limbs were useless before the end of the day.

I stayed in my apartment all day until I left for work at 4:30.

I went on another hiking adventure, this time with my friend Anthony Gonzalez.  And this time we started AFTER sunrise.  Our destination was Maunawili Falls in Kailua.  Since neither of us drive, we took several buses there.  That in itself was its own impromptu adventure. . .

It was Anthony’s first time to Maunawili, but I had gone once before, and by bus, so I was semi confident in our ability to take public transit there.  The first leg was no problem.  We departed from Ala Moana on the 56 all the way to Kailua, then waited at the bus stop for the 70.  It was supposed to come about five minutes later, but when it didn’t, I checked the schedule on my phone and discovered it would be there for another twenty.  I cursed Google Maps as we took advantage of our newfound time to grab some snacks.

The 70 should have taken only eight minutes to get to Maunawili, but for some reason, it was leisurely driving through downtown Kailua and past Lanikai beach.  Only when we hit a loop and turned around did I realize what went wrong: I had us waiting for the 70 on the wrong side of the road!  The 70 that was supposed to show up five minutes later probably did, but we were looking down the opposite direction.  To add insult to injury, after we came back and passed our original stop, the only other stop before Maunawili was in a military base.  Since we had no military ID, we had to wait on the side of the road for ten minutes until it came back out.  I added over an hour of travel time because I assumed Google Maps would make a mistake before I would.

The hike itself was fantastic.  It wasn’t as muddy as my first time, so we didn’t have to take each step with caution.  Compared to Stairway, Maunawili is barely a hike.  It’s more like a stroll through a pretty jungle.  The highlight of the journey is the small waterfall at the end.  The watering hole is small but deep and surrounded by high cliffs.  As soon as I got there, I climbed up and around the left to a ledge forty-fifty feet above the water and jumped off.  If I wasn’t peer-pressured by my roommates to jump it last time I was there, there was no way I was going to do it alone out of curiosity.  But I had done it, so I couldn’t wait to do it again.  Exhilarating as it was, that first jump ended with my butt squarely smacking the surface.  I had bruises all over my rear end for the next week.  Thankfully, I hit the water feet first next three times I jumped.  I also jumped off the shorter waterfall ledge several times with Anthony and some other hikers we met.

Off the short jump with Other Anthony

Of course, we ended up at Bubba Gump’s afterward for some food.  You’d think I’d want to avoid that place as often as possible, but the truth is Bubba’s is where most of my friend are most of the time, so I end up cruising by on my days off.  My 70% discount is a motivating factor as well.

I again stayed in all day until I left for work at 4 pm.  I was even too lazy to find somewhere to watch the Cal football game that morning.

No hiking this day, but still filled with fun activities.  To preface, I am on what’s called the Safety Team at work.  Basically, it’s a group of employees who meet once a month to discuss how to make the restaurant accident-free.  As a reward for staying 300 days safe, we were given the day off and taken on a Safety Outing to Sandbar in Kaneohe Bay.  Boats, booze, and buddies?  Safety Team rules!

Our manager provided the boat that took us out into the middle of the bay where, almost phenomenally, the sand rises to the surface for a stretch of maybe 300 yards.  At different times of the year, the sand is either right above or right below the surface.  The day we went out there, it was just below, which I prefer as it looks like everybody’s walking on water.  As the day progresses, more and more boats gathe and people get out, walk around, and mingle.  Imagine that!  People walking from boat to boat, offering each other beer and food while blasting music.  It trips me out every time I go. 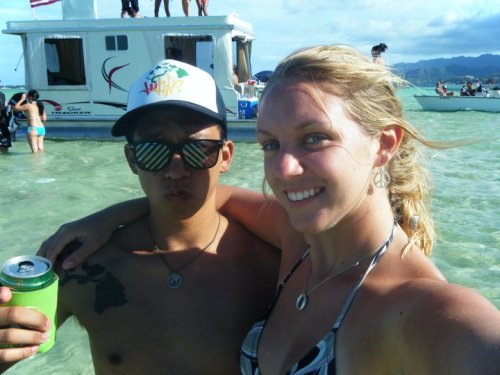 Kelli, my Thizzface, and our boat in the back

Foodwise, we started off with some lau lau, rice, and curry chicken.  Halfway through the day, we started up the grill and barbecued some hamburgers.  Between that and afterwards, there was plenty of chips to snack on.  After we departed, most of the team went to Haleiwa Joe’s, but I joined my family for Sunday dinner.  Since it was my cousin Ellis’ birthday, we went out to eat at delicious Japanese restaurant, then returned to Waipio for dessert.  Damn, I guess it’s a good thing I did all that hiking to counteract Sunday’s food intake!

I know I worked at 5 PM that day, so I’m pretty sure I did nothing at all until then.

During my “valley” days, I started to think that I have too much time on my hands.  Even if I work, I still look for ways to fill the hours before my shift.  That’s when I decided to get another job.  I applied for Barnes and Noble.  I figured, it’s right next to Bubba’s, I go there all the time, and a lot of my money magically turns into DVDs.  I might as well get paid to be there.

Although, with a second job, how rare will my “hill” days become?

She would make a good hiking buddy. . .