Before we could leave Deadwood, South Dakota, Ian wanted to get an oil change.  He’s one of the few people I know who pays attention to those little dashboard lights.  Although, seeing as this is one hell of a trip, maybe he’s just taking more precaution than usual.  The whole thing thankfully took only twenty minutes, which was good since we had one of our longest drives ahead of us.

Fast forward through a ten-hour drive that featured: me sleeping in the passenger seat, conversation about being Filipino, and listening to Chuck Klosterman’s audiobook Sex, Drugs, and Cocoa Puffs. . .

Despite the evening hour, Minneapolis was hot and humid by the time we rolled in.  And despite our somewhat late arrival, our Minneapolis couchsurfing host, Matt, was just chilling on his stoop with a few buddies and some beer.  He approached as we were parking around the corner and I could tell right away from his demeanor and his barefootedness that he was going to be a laid-back, friendly host.

Matt helped us into his comfortably cluttered apartment—a bachelor pad immediately reminiscent of many I’d seen in Berkeley—handed us some PBR, and introduced us to his friends downstairs.  If there’s one thing I could say about Minnesotans based on my brief encounter with them, it’s that they all try their best to make you feel welcome.  Matt, his roommate Joel, and their neighbors immediately included us in their conversation while also asking about our back stories and our trip so far.  It was a comfortable, casual dialogue rather than the “20 Questions” interrogations we’re used to answering.

After another round of PBR, Matt and Joel took us to Brit’s Pub, an awesome bar with a rooftop patio featuring a huge, grassy area for lawn bowling.  It was still humid out, but the local brews helped cool us down.  Another one of their friends, Brian, showed up.  Brian was also welcoming and friendly, even suggesting a friend with whom we could crash in Philly.  Good job, Minnesota, you raised your kids well.

In a sporadic burst of heat-busting awesome, we climbed around in a fountain sculpture for a good while before walking back to Matt’s place.  We ordered some sandwiches from a late-night deli delivery place, played with his two cats Asterisk and Ampersand, and finally crashed in the early morning.  Matt had gone to work by the time Ian and I woke up.

Despite the nice cross-breeze from the open windows and the ceiling fan, we woke up sweating.  The shower was a brief reprieve from the humidity, but by the time we were out of the apartment and exploring Minneapolis, it was almost a distant memory.  We walked down 3rd Avenue through the hot, stiff air to the Metro, which—for a beautifully low flat rate—took us all the way to the air-conditioned behemoth known as the Mall of America. 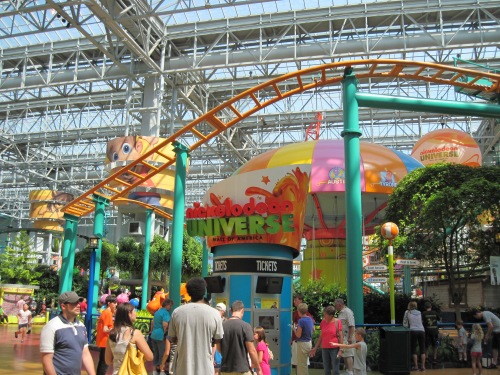 I remember Matt and his friends reacting to our mention of the Mall of America with a bit of disdain, and I could see why.  For a mall, it was sort of spectacular, what, with its indoor amusement park and all.  But for a national landmark, is that the best Minnesota could do?  Our hosts didn’t hate the mall itself too much, but they surely didn’t like that it was all Minnesota was known for.  Ian and I only spent an hour or two in the over-sized shopping center, leaving with the same level of confusion about its fame.  After all the bells and whistles, it was just a mall.

We took the Metro to Minnehaha Falls where I felt as though I sweated out as much water as the falls produced during our visit.  Not far downstream from the bottom of the falls, everybody was walking around in the river.  I waded out until the water was knee-deep, but had I been wearing my board shorts, I would have dove all the way in.  I did take pride in my calloused Hawaiian feet as I casually strode out over the rocks while everybody else seemed to be walking on eggshells.

A metro ride and bus transfer later, Ian and I were at the University of Minnesota campus and damn was it pretty!  Castle towers somehow mixed well with the more modern architecture and the wide spaces  in between featured vast grassy areas and curvy bridges.  The student union was memorable even if only for its interactive, touchscreen maps and the water fountains that encouraged you to refill a water bottle.  I kept on thinking that I could easily attend the school, but then I remembered it snowed there.  Hard to imagine as we walked through a wall of hot air. 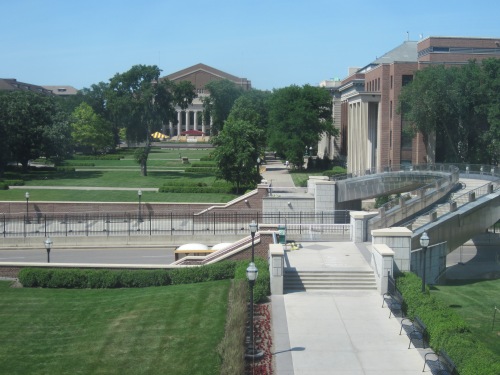 We got back into Downtown dreading the walk down 3rd Avenue, only to remember that Minneapolis had the most awesome urban development I never knew existed: the skyway!  A series of air-conditioned sky bridges linked buildings all across Downtown.  The skyway was developed for the unbearably snowy days, but worked just as well for the unbearably humid ones, too.  Ian and I were able to navigate the ten or so blocks from the Metro station to the Convention Center near Matt’s house without having to step outside!

By the time late afternoon rolled around, it was time to meet Brad, our second Minnesotan host.  Matt had to go out of town for the weekend, so we found a new place to crash through another online community, Reddit.  Brad was a UM Law student and, as such, invited us to a house party his classmates were throwing.  If the precedent for welcoming Minnesotans was set with Matt’s friends, it was proven exponentially by Brad’s collegues.  Ian and I never felt like outsiders, and never needed to stick together to have someone to talk to.  Hell, I didn’t even see Brad for a few straight hours.  Every time I turned around, I met another smiling stranger with whom I fell into conversation.  Thank you to Jill, Andrew, Brent, Josh, Julia, and the many other folks we got to know well in one awesome night.

It was crazy to think that we—complete foreigners to Minnesota—were readily welcomed to crash in two people’s apartments and hang with their friends.  Online communities such as CouchSurfing and Reddit have done much to prove that there are still a lot of decent, trustworthy human beings in the world.  And many of them can be found in Minnesota.