This is for the stray observations, story details, and drawn-out discussion that couldn’t fit in the other NYC post, thematically or otherwise.

The cheap lamination of my Hawaii State ID did not fare so well in Manhattan.  Once I was refused entrance until I showed them my expired California Driver’s License, once I was refused entrance even though I showed them my California Driver’s License, and once my Hawaiian State ID was actually taken away from me.  When the bouncer saw I was serious about getting my valid ID back, he let me in, but with much hesitation.

A lot of people are turned away from New York because of the “rude New Yorker” stereotype.  I’ll admit, I was, too.  However, having interacted with New York natives first-hand, I can say that this is not entirely accurate.  They’re not outright rude, just. . . honest.  They might be short or curt in interaction because they have somewhere to go, but I wouldn’t call this rudeness because rudeness implies malice.  If anything, they’re indifferent, and I much prefer someone honest about their indifference than one putting on airs with fake smiles and feigned interest.  In a way, New Yorkers have the same self-serving mindset of LA natives, but they’re not fake about it, and I respect that.

List of places we ate at because TV/movies told us to: H&H Bagels (as mentioned in Entourage), Gray’s Papaya (as seen on How I Met Your Mother and No Reservations), Katz’s Deli (as seen in When Harry Met Sally), White Castle (you know where that’s from). 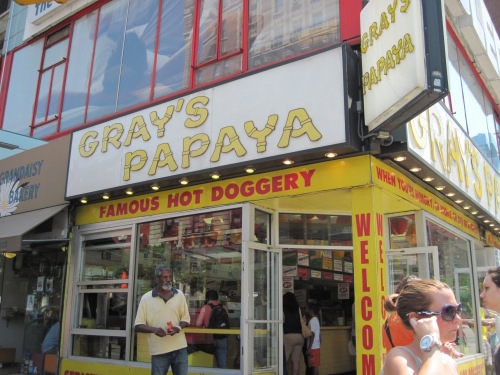 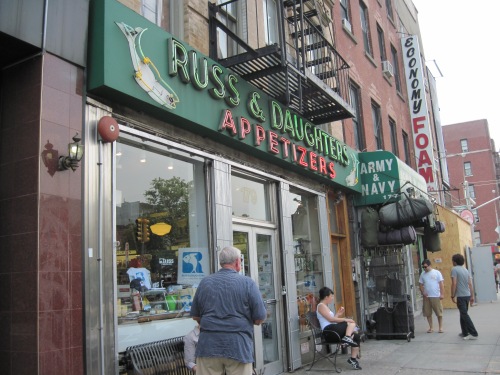 By the way, everything in New York is delicious.  That’s a fact.

About the pizza: Lombardi’s was good, but it wasn’t what we wanted from our first New York pizza experience.  When Ian and I thought “New York pizza,” we envisioned oversized and greasy yet delicious slices to fold and devour.  Lombardi’s was a sit-down restaurant-quality pizza with fresh ingredients that, while tasty, wasn’t the quintessential New York slice we sought.

And then we discovered Brick Oven Pizza 33.  A block from our place in Chelsea, Brick Oven Pizza 33 was a walk-up-to-the-counter type place, open late, and run by hard-working men in messy aprons.  We picked out our slices from behind the glass window and–after a few minutes of waiting for our pizza to warm up in the titular brick oven–chomped down on swarm of wonderful flavors, coated in grease but not overwhelmingly so, resting upon a blissfully crispy crust.  I went there three times in two days.

Now, is it better than Chicago’s deep-dish pizza?  That depends on two things: 1) what you want from pizza at the moment, and 2) how you define pizza.  First, Chicago pizza is what you should eat if you want to fill up with a meal at a restaurant.  It takes a long time for it to come out and requires a fork and knife, but the fresh ingredients piled in a deep and flaky crust is worth all the hullabaloo.  If you want a quick and delicious bite to hold you over through the day, New York pizza is the way to go.  The right ingredients folded between a thin crust will satisfy your mind, body, and soul.  To address the second point, the biggest argument I’ve heard from diehard New Yorkers against Chicago deep-dish is that, basically, it’s not pizza.  “You’re not supposed to eat it with a fork and knife!  You’re supposed to pick it up!  You can’t fold this!”  Basically, their argument comes down to semantics, how they define what a pizza “is.”  However, you rarely hear them address the quality of the food item.  Based on their narrow definition, New York pizza wins by virtue of being pizza.  If you were to expand your definition of the dish, though, and compare overall quality, Chicago pizza wins hands down.

Our first 24 hours in New York: We had been in Rigo’s place not five minutes when he invited us to his buddy’s rooftop barbecue in Queens.  The host and majority of the guests happened to be Filipino.  Go figure.  A few hours after grilled meat, curious liquor, drinking games, and fireworks, Ian and I found ourselves in a cab to the Lower East Side with Rigo and his buddy Eugene.  We arrived around midnight and the streets were swarming with dolled-up young New Yorkers.  Donning shorts and sandals, none of us fit in, but that didn’t stop us from bar-hopping ‘til the early morning.  We eventually ended up crashing in Eugene’s Brooklyn apartment.

The following day was the most impromptu adventure we’ve had.  You see, Ian and I were planning on returning to Rigo’s house after the barbecue before going out.  Instead, we woke up at an apartment near the entrance to the Brooklyn Bridge and took off from there.  I had a nearly dead phone, yesterday’s clothes, no camera, and no protection from the beating sun.  It was the best outing yet!

Since Grimaldi’s Pizzeria had a long line, we walked over the Brooklyn Bridge, through Chinatown and Little Italy, and to another well-established pizzeria: Lombardi’s.  Eugene wasn’t used to walking so much, and the added factors of the previous night’s alcohol and that morning’s heat did not help him through this new activity.  We eventually crashed in Washington Square Park.  Well, the other three did; I was too excited to sit still and instead wandered around the park taking pictures until my phone died. 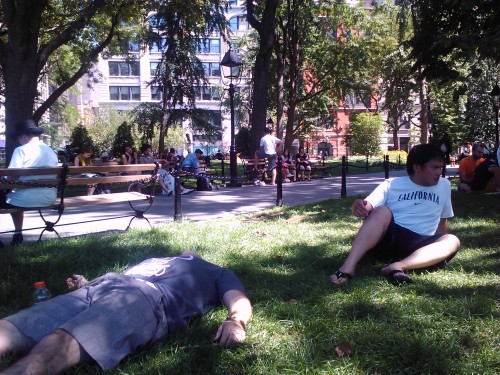 Eugene split shortly afterwards to catch up on sleep while Rigo, Ian, and I kept exploring.  We got some MetroCards, watched the Women’s World Cup at a pub near Union Square, wandered around the Rockefeller Center, and eventually met up with his girlfriend, Sara, at the Halal Guys food cart.

That was just the first day, and the week just kept getting better.

Of all the observation decks we’ve visited (Seattle Space Needle, Chicago’s Willis Tower—formerly known as the Sears Tower, and the CN Tower in Toronto), the Top of the Rock was the best.  Three levels of spacious decks, open-air views of the entire city, unobtrusive freestanding glass panels as barriers instead of wire cages or dirty windows, and no long lines.  I don’t know how the Empire State Building observation deck compares, but I can’t imagine it could be better. 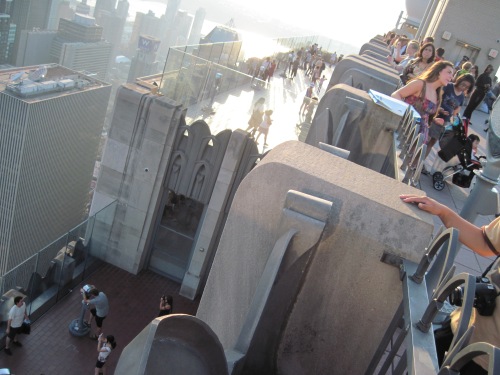 Of all the tours we’ve been on (Coors Brewery, Motown Museum, Steamwhistle Brewery), this was the worst.  Well, “worst” sounds too negative, and it wasn’t bad, it was just really uninspired.  It was as if they were banking on the fact that they were an internationally recognized studio in a famous building.  The pages were just young interns doing their time until they could climb to the top.  Sure, they were easy-going and entertaining at times, but they mostly just lead us to empty studio sets and spouted the obligatory info.  In contrast, our tour guide for the Motown Museum had a warm personality, vast knowledge of all things Motown, and a natural ability to involve the crowd without making it feel like a pop quiz.  Plus, you could tell he was passionate about the place, working there because he wanted to be a tour guide and not because it was a stepping stone to something greater.

During our first tourist day with Meghan, we meet a Dutch man and his daughter.  He needed help figuring out which station got him closest to Little Italy.  Ian and I were actually oriented well enough to help him out.  We were excited to learn that he’d be taking his daughter to San Francisco afterwards.

A few days later, we ran into them again!  What were the chances that they’d be in the same car of the same train on the same line at the same time several days later and in a different part of the City?!

Speaking of subway awesomeness, this one time, a group of dancers performed breakdancing stunts on a crowded train while it was moving!  I don’t know how they could have possibly practiced those tumbles, jumps, and flips without kicking anybody or running into the center pole.  I was thoroughly impressed and tipped them a buck without hesitation.  The native New Yorkers were less impressed, but I imagine they were just pretending to be to keep up their tough personas.  Losers.

In line for the ferry to the Statue of Liberty, we came across a happy old man playing a steel drum.  We enjoyed his rendition of “The Star Spangled Banner” so much, I was inclined to tip him.  The man asked where I was from and I said, “Hawaii” (or “California,” I can’t remember–it depends on my mood).

He replied with, “No, I mean, where are your parents from?”

Without a moment’s hesitation, the old man busted out with the Filipino National Anthem.  All I could do was laugh and smile.  Really, that’s all I could do because I don’t know the words!