That’s not a peace sign; that’s me bragging about how I did Koko Head twice in a row.

Born and raised in a suburb of the San Francisco Bay Area, Anthony had a great childhood filled with good friends, caring family, and an education shaped by cable television.   He did his undergrad at UC Berkeley, which is only a forty-minute drive from his hometown, and earned a BA in Film Studies.  After 22 years of living in the same general area, he thought it was time for a change.

Growing up, Anthony occasionally visited his family in Hawai’i.  He always felt he fit somewhere between a tourist and a local, so he moved there to fix that.  He probably has plenty of years left to fall into a career and settle down, so he figured now would be a good time to travel the world and experience new places.

Besides, what was he going to do with that degree in this economy? 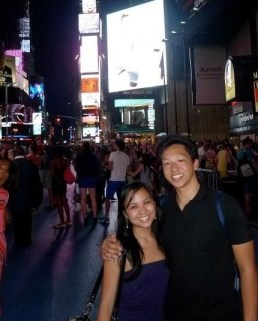 The super-touristy shot was all HER idea!

Two years and eight months after gallivanting off to Hawaii, Anthony picked up and moved again–this time with his girlfriend. He switched his blog from Young Man Went West to Young Man Went East as he wandered to the opposite end of the country to New York! Follow him as he looks for a place–both figuratively and literally–in the world’s greatest city.