I fell in love with Ann Arbor as soon as we got there.  Yeah, the University of Michigan is a pretty campus, blah blah blah, but the surrounding town?  Awesome!  And why?  Because it reminded me so much of my beloved Berkeley.  It’s the measuring stick I use to judge other college towns.

The college merchandise shops and local food joints along South University and State Street mirrored those on Telegraph Avenue, while a few blocks away were the slightly nicer restaurants and trendy stores that lined Main Street, Ann Arbor’s answer to Berkeley’s University Avenue.  Frequenting these main arteries were familiar clientele:  young professionals, old professors, and college kids of all kinds, from hippies to hipsters, Greeks to geeks.  In Ann Arbor, as in Berkeley, the local community formed a symbiotic relationship with the collegiate atmosphere, forming the quintessential progressive college town I love.

I might be talking it up too much, but it left a good impression on me.

Our couchsurfing host was a laid back Asian guy named Ken who was actually born and raised in Honolulu.  He lived in San Diego for a bit before roadtripping around the country, eventually stopping in Ann Arbor when he got broke.  He found a career and settled in.  We, of course, had a lot to talk about.  Graciously, he took us to a late-night burger place and we continued the conversation over a pitcher of local beer.  And he paid for that beer.  Our hosts are awesome.

Ken had work in the morning, so we didn’t see him at all the next day when we woke up at the crack of 11 AM.  We got ready, ate pricey but worthy Reuben sandwiches at everyone’s favorite deli, Zingerman’s (recommended by three different people), and left for Detroit.

Of course, to get in the mood, I blasted Eminem’s The Marshall Mathers LP.

That’s why we don’t call it Detroit, we call it Amityville/
You can get capped after just havin’ a cavity filled/
Ahahahaha, that’s why we’re crowned the murder capital still/
This ain’t Detroit, this is motherf***in Hamburger Hill!

Oh, Detroit.  I can sum up our initial reactions by quoting part of a conversation we had with a very nice and helpful homeless woman named Linda:

“Where do y’all come from?”

“Why the hell did you come here?!”

We wondered the same thing on the drive in.  The skies grew overcast, throwing an ominous shadow over the littered highway.  In the distance we saw an apartment building missing an entire wall, revealing a cross-section of abandoned floors.  It looked like France during World War II.  I guess I take it for granted that a city would have the resources to repair such a mess.  Ian and I both wondered if we should just keep driving through to Canada, though we each were unaware of the other’s similar thought until later.

The first parking lot we saw was only $5 for all day, so we took it right away because we had no idea where in Detroit we were or where to go.  It happened to be in Greektown, one of Ken’s suggested locations.  However, still full from the Zingerman’s Reubens, we had no interest in trying any Greek food, and therefore had no interest in staying in Greektown.  We walked somewhat aimlessly, veering whenever we saw fountains and plazas.  It was in one of these concrete clearings that we met Linda.  She saw me looking at a map, asked me if we knew where we were going, then suggested we check out Hart Plaza.  She walked with us for a block or two, asking us about our trip with legitimate interest and motherly concern.  Only after whole-heartedly warning us to be careful, Linda very politely and hesitantly asked if we could spare any money.  Ian did.  I only had fives, but I would have, too.

Linda was right; Hart Plaza was refreshingly nice.  The open concrete space featured several abstract sculptures and a giant fountain.  The most amazing sight, however, was just across the Detroit River: my first view of Canada!  Windsor, Canada, to be exact, and it tripped me out because we were actually looking towards the south at it. 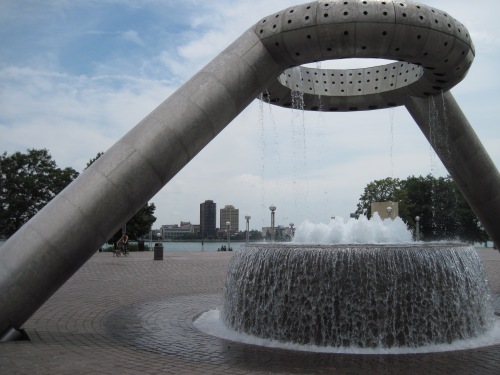 Hart Plaza, with Canada in the background!

Ian and I strolled a bit further, eventually rounding the Tigers’ baseball stadium and—just across the street—the Lions’ football field.  Save for a few well-kept plazas we saw along the way, the city seemed way past its prime.  Grand old buildings that go unused, empty storefronts lining the sidewalks; it was all a bit depressing.

Our last stop, however, surely cheered me up.

I’ve got sunshine/
On a cloudy day/
When it’s cold outside/
I’ve got the month of May.

We drove past 8 Mile Road (yes, I’m an Eminem fan, but I didn’t want to detour in Detroit to snap a picture of a sign) to an even more legendary street: West Grand Boulevard, location of the Motown Museum.  The museum is connected to the actual house where they recorded all the classic Motown acts in the basement studio!  The ten-dollar tour was surprisingly entertaining.  Our guide was humorous, interactive, and impressively knowledgeable about all things Motown.  He spouted out names, song titles, and dates without a moment’s hesitation.  I don’t think I can recall any field of information with such certainty.  The tour concluded in the basement, Studio A, where all the original equipment and instruments still remain.  Our guide taught us some choreography and then had us perform.  The women danced to the Supremes’ “Stop! In The Name Of Love” while all the men did the Temptation Walk to “My Girl.”  Let me repeat: I sang and danced to “My Girl” in Studio A where the actual Temptations sang and danced to “My Girl”!  It was surreal. 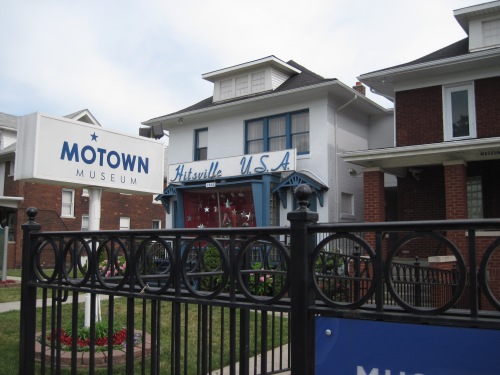 I, of course, blasted my Temptations Ultimate Collection CD on the way out of the parking lot, turning it down momentarily when I realized a funeral home was next door.  But believe you me, I was belting out with the Motown legends all the way to the Canadian border.

The wait from the bridge to the border crossing was surprisingly long.  Where were we going, Mexico?  We got through about 20 minutes of Tina Fey’s Bossypants audiobook by the time we reached the booth.  I thought it was going to be simple: passport, smile, welcome to our country, eh.  Instead, I was caught off guard by the Spanish Inquisition.  “How do you two know each other?”  “Where are you going?”  “What are you doing there?”  “Do you have jobs?”  “How are you funding the trip?” 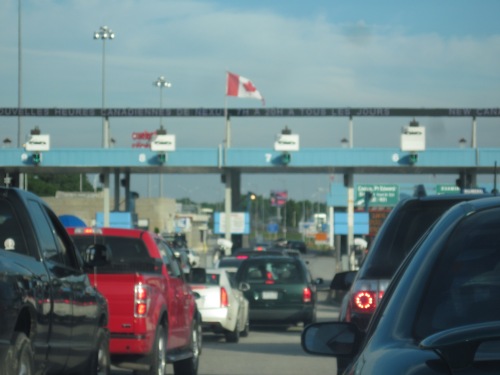 The one part that truly annoyed me, however, was his response to our road trip.  “So, this is like your last hurrah before joining the real world?”  Hey!  Screw you, guy!  I’m the one seeing the real world!  How’s your view from your tiny booth, working man?  Peer down at me from your elevated stool, why don’t you!

What actually came out of my mouth wasn’t as fiery.  I looked at him and said with conviction, “It’s one of many ‘last hurrahs.’”