It has been two years, eight months, 20 days, 19 hours, and 35 minutes since I landed at that same airport to start my nomadic lifestyle. My initial goal was to make a year, but no more than two. My time in Hawaii stretched out even longer than that, not for lost ambition nor an addiction to beach-side living, but rather for logistics. If I had moved before my road trip–as I had originally intended–it would have been less than two years but I wouldn’t have had enough money to move. And I wouldn’t have met Jenn.

I’m glad I stayed as long as I did.

But now it is time to go. I had previously wanted to move to a new city every year to fulfill my fantasy of a nomadic lifestyle, hence the one-year-in-Hawaii time limit. After a few stabs at starting anew, I would have eventually moved to New York for my finale. As it were, I found myself in Hawaii for nearly three years and with a girlfriend who’s had a decade-long dream of New York. I’m ready to fast-forward to that finale.

Jenn and I left Hawaii to arrive in California just in time for my sister’s 30th birthday and my cousin’s wedding. I know meeting a hundred family members would be overwhelming, but she has been taking it with grace. My parents love her and she formed a bond with my sister within hours. The tables will turn during our second week in California as she reunites with some of her west coast-based friends and I try to live up to their expectations of me. At least it’ll be on my turf!

We will finally arrive in New York the following Wednesday (all my adventures seem to start on a Wednesday!), where my nomadic lifestyle will come to an end. . . as will this blog. It wouldn’t make sense to keep writing under “Young Man Went West” if I’m no longer in the West. . .

Hence why I bought the domain YoungManWentEast.com!  Go ahead and type it in, you’ll be redirected back to this home page.

Be sure to change your bookmarks to “Young Man Went EAST” (because “Young Man Went WEST” will become defunct soon) so you can keep up with my next big move the best big city.  No time limit this time, just infinite dreams for an indefinite future. 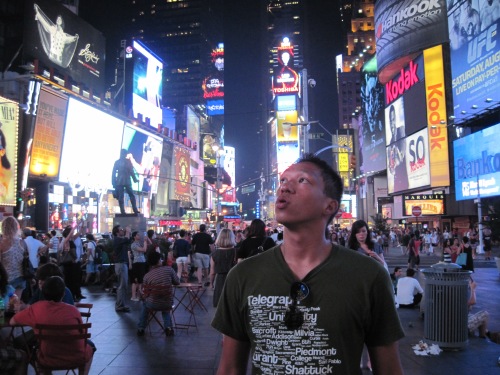