It has been almost two years since my last post on YMWE. I had considered my brief stint as a blogger finished. A large part of that had to do with my living situation: since I no longer live alone, I feel no urge to share my experiences online because, well, I share them in real life. This blog started as a way to let other people know what I was doing and thinking and feeling. When you live with a partner, however, you do that instantaneously, without a computer. So, while living with my fiancee is fantastic for my own life, it’s anathema to this blog. And I’m okay with that.

This should inevitably lead you to wonder, So then, what are you doing writing again? Is everything alright at home? Are you and Jenn … ohmigod … don’t tell me …

Don’t worry, Jenn and I are fine. I’m writing because I’m a teacher and it’s summer and I can’t just watch Netflix all day . . . though I’ve been trying. Furthermore, Jenn and I recently got back from a fantastically-planned and -executed trip across Europe, giving me something to write about (because it’s not like any other life changes have happened to me recently **cough**first year of teaching**cough**cough).

I don’t even want to attempt to go into detail about everything we did during those three weeks in Italy, France, England, and Spain. Not only is that an overwhelming task for someone trying to revive a blog, but it’s already being done by Jenn on her blog jenNYdreams.com. I cannot compete with her passionate recollection of our trip, broken down by location. She’s almost done with Italy, so catch up with her posts on Milan, Venice, Florence, Rome, and Southern Italy!

Instead, I made pictures. Enjoy!

In a world with emoji, this is how I’m supposed to explain our trip, right? 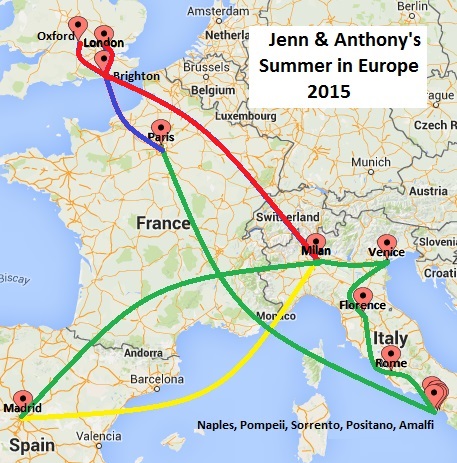 Additionally, I’m going to leave you with an excerpt from an email I was writing to a friend. He was wondering how my trip went, what the highlights were, and what advice I’d give. My response kept going and growing until I thought to myself, Man, I should really post this somewhere. This is that somewhere.

Highlights and Advice, excerpts of an electronic correspondence from A. Ramil to one I. Villanueva, MMXV:

I don’t know if this counts as a highlight, per se, but the sheer audacity of the trip was what made it so fun. Four countries, four languages, over a dozen cities, countless forms of transportation. It was amazing what Jenn planned out. Further still, it was amazing what she was able to buy/book ahead of time: plane flights, train rides, buses, museum tickets, and all of our hotels and airbnbs. The locations of our hotels were great (especially in Positano on the Amalfi Coast in Southern Italy), usually pretty central to everywhere we wanted to be, so we could spend our time exploring [those places] instead of just trying to get there…. Not only were our various locations steeped in history that I know well, they were completely different ages of history, too (Ancient Rome, the Renaissance, the French Revolution, etc.), some of which I taught. It was really exciting to see such iconic places and landmarks in person.
As far as advice goes, first and foremost, have Jenn plan it out. Unlike most people, she loves doing hardcore research about where to go, how to get there, where to sleep, what to see, and–most notably–what to eat. And despite the heavy planning, we still had plenty of opportunities to wander aimlessly and rearrange the itinerary when we felt like it. [Having] few plans is relaxing when staying in a big place with plenty of time, but if you have a short amount of time in multiple places, it’s good to plan.
Secondly, even though it might cost a little more, finding a place to stay near the [the center] of a city will save a lot of travel time (and might even balance out financially). You are able to explore a little more and stay out a little later without having to worry too much about when and how to get back to your place at the end of the day. Oh yeah, and make sure your place has Wi-Fi because it’s better to spend an hour or so each night uploading photos with fresh memories than to have to sift through thousands of them at the end of your trip.
Thirdly, buy as much as you can in advance while making sure the tickets will still be valid once you get there. It saved us a lot of time and headache[s] to enter various museums and whatnot with advanced tickets. It was great waltzing past the longer line of unprepared tourists. However, for a museum in Paris, she bought our tickets so far in advance that they had become void by the time we got to it. It only happened once, and it was a place that we were okay with missing, but I would have been devastated if that happened at, for example, the Colosseum.

I’m sure there’s more I can say about this trip, and maybe I will later. Otherwise, I have this intriguing idea of starting a teaching blog. I’ve been told it is a good idea to journal about teaching experiences since it allows one to reflect on teaching practices in order to repeat what went well and improve on what didn’t. I didn’t journal during my first year of teaching and wished I had. Maybe come September, you’ll see Young Man Went East: Teacher Edition!

Or . . . Young Man Went East: A Portrait of a Young Teacher

Or . . . Young Man Went East: Which Kid Annoyed Me the Most Today?

This was the balcony of our room in Positano. You think you can get a room like this as a walk-in guest? Book in advance, people!