Young Man On The Road #3: You Have Died of Dysentery

Ian and I actually started the big trip in two different places.  I had spent the night at my sister’s place in Sacramento while he stayed with his family in Livermore with the plan to pick me up the day after Father’s Day.  “I’ll be there by noon,” said he.

At 2:30 pm, Ian found me walking around Midtown Sacramento, and there our journey began.

. . . but not before a quick stop and less-than-quick reshuffling of luggage at a nearby Safeway.  By 4:30, we were packed in, amped up, and on our way to Portland!  Or so we thought.  The late start and setting sun decided we would make Eugene our first stop.

We rolled into the Northwest college town around midnight and stopped at the one place that seemed to have any action: a packed bar on the University of Oregon campus called Rennie’s Landing.  Now while the food looked fantastic, we decided to save our money and just get a pint each.  I wasn’t surprised but truly delighted to see that their small selection of beers on tap comprised quality brews, including one of my favorites, a black ale called 1554 that I haven’t been able to find outside of Henry’s in Berkeley.

After a quick game of pool (which I won!), we had to find a place to sleep. We weren’t yet ready to start our trip with a night in the Honda Civic, and since our last minute crash sites fell through, Ian and I sprung for a cheap motel.  Totally worth it since we were able to cook some rice and reheat some leftover steak.

Yeah, that’s right.  We have a rice cooker.

The next morning, we walked around the beautiful, green, bike-friendly UO campus for an hour, then continued on to Portland.

Oh, Portland, how incredible you are!  It’s refreshing to see a well-planned city with an efficient rail system and a green agenda (hey, Honolulu, HINT HINT!).  You can feel warranted pride emanating from the people gathered in the many parks and along the waterfront.  This city works.

Stuffed with trail mix and jerky, Ian and I weren’t yearning for a Portlandian meal (which would most likely be healthy, organic, and delicious), but we weren’t going to pass up Voodoo Doughnuts.  A Facebook comment, a Reddit comment, my travel book, and Anthony Bourdain collectively told us to go there.  The  downtown location was under renovation, but a thirty-minute walk brought us to the second location and $10 got us a baker’s dozen.  To describe these doughnuts would expand this already-lengthy post by another paragraph, so I’ll let a picture do the talking. 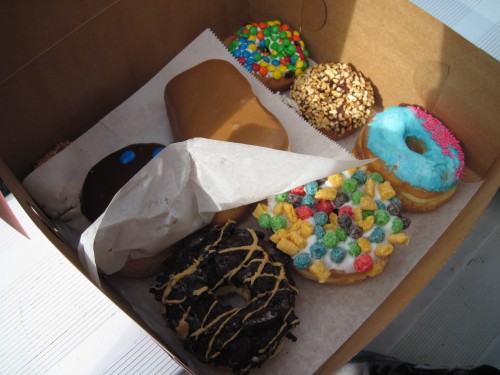 As much as we loved Portland, we had nowhere to stay the night.  On the other hand, we had somewhere to sleep and people to see in Seattle, and being there by night would get us on our proposed schedule.