Young Man On The Road #4: Tossed Salad and Scrambled Eggs

Ian and I had no regrets leaving Portland after just an afternoon because waiting for us in Seattle (well, just outside Seattle in Mountlake Terrace) were the sweetest, most accommodating hosts we could ever ask for.  My Uncle Scott (and by “Uncle” I mean cousin’s wife’s older brother) and his wife Jennifer let us stay in their beautiful home even though they were going to be away in Montana for business.  They were leaving Wednesday morning and were willing to let us arrive after they’d left, but we thought it best to power through Portland to see them Tuesday night.  Best decision yet, as Scott and Jennifer are terrific company: equally interesting and interested, always willing to provide, and offering to cook meals for us! Ian and I almost didn’t want to leave the house, but we had a city to explore.

On Wednesday we toured the University of Washington and the surrounding U District before driving downtown.  The redbrick buildings and wide open spaces of campus were pretty, but it wasn’t Berkeley (I say, completely unbiased).  However, University Way, a.k.a. “the Ave” was like a cleaner, longer, friendlier version of Telegraph Avenue.  No street vendors, granted, but no hobos either.  We scarfed down some $3 Vietnamese sandwiches (score!) and then headed south towards Seattle’s most prominent landmark.

I did not go to the Seattle Space Needle the last time I visited the Emerald City.  Crazy, yeah?  They friggin’ love that thing; it’s plastered on every souvenir and half the business logos.  But Anthony Bourdain was too cool to see the pyramids while in Egypt, so I felt no pressure to see the Needle during my first visit.  This time, I felt somewhat obligated to go.

Behind the 360-degree observation deck is somewhat of a lounge area with a cafe, snacks, and a post-modern aesthetic.  Just below that is a swanky rotating restaurant that Ian and I definitely could not afford.  I did, however, spring for a chai latte upstairs.  I felt very Seattle-y sipping a Starbucks beverage with a view of the city below.  Due to a private function, we had the great fortune to be turned away from the Space Needle when we first attempted to ascend to the top that afternoon.  Returning that night after exploring Downtown, I’m sure we got a much better view with the lit city skyline and the long-lasting twilight sky. 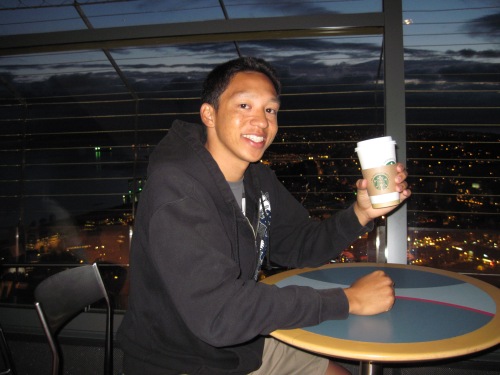 The area around the Space Needle was even more impressive.  It’s surrounded by the monorail that leads straight to Downtown (three blocks from Pike’s Place Market) and the Experience Music Project/Science Fiction Museum.  Our first goal of the next day was to visit the EMP/SFM because their two featured exhibits were the  Nirvana and Avatar!  You can really gauge where you stand on the nerdy-to-cool scale by seeing which side of the museum you’re most excited about.  I love me some Nirvana, but I was totally geeking out over the interactive Avatar displays.  That should be no surprise to you folks. 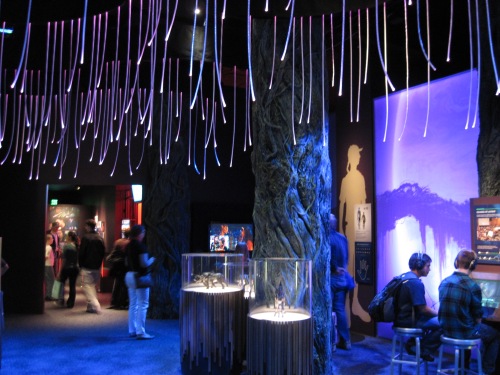 We ate a packed lunch in the car (thank you for the leftovers, Scott and Jennifer!) then headed to Belltown afterwards too see my former roommate Charlie.  We lived together in my first apartment in Hawaii, but he left the island for Seattle a year ago.  He is now a bartender at a sleek Japanese bar where I ate sushi, drank beer, watched Cal baseball lose, and caught up with my old buddy. 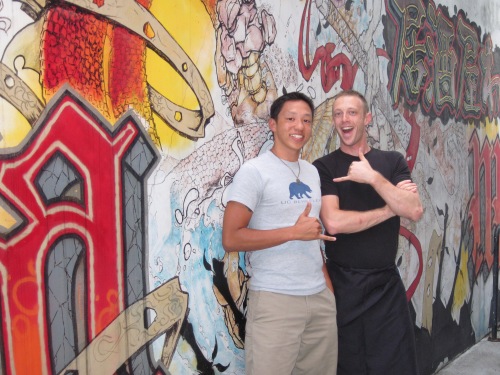 After a little more downtown exploration, we packed it in somewhat early.  Ian and I had laundry to do, dishes to clean, and cats to feed.  Plus, beautiful house.  We were reluctant to leave the vibrancy of Seattle and the warmth of Scott and Jennifer’s house so early, but we had am eight-hour drive ahead of us.

P.S. Sorry these posts have been pretty long and decidedly not “micro,” but I’ve had the opportunity to use my laptop more often than I thought.  Also, brevity ain’t my thing.