Since this new year started, I’ve acquired a smartphone, started sporting a much shorter haircut, and replaced my ratty, tape-covered bike seat and handlebars with brand new parts.  Minute, materialistic upgrades like these, though insignificant in the long run, can give you the feeling of self-improvement, or even rejuvenation.  Small changes can have seemingly profound effects.

But this post isn’t about small changes.  It’s about some bigger ones.  With real effects.

Firstly, I began learning how to play the ukulele.  Prompted by both my desire to acquire something uniquely Hawaiian before I leave and my failure at picking up surfing, I turned to the tiny, stringed symbol of the Hawaiian islands.  When I first borrowed my cousin Ellis’ tenor uke, it was slightly out of tune, but I started browsing how-to YouTube videos anyway.  With misguided confidence, I attempted to tune the thing by ear.  That was a mistake.  So it sat in the corner of my room for a week or two before I got my hands on Juvana’s chromatic tuner, and back to YouTube it was.  I managed to almost master three chords, but no songs.

It wasn’t until Shauna came along and started teaching me that I picked up the uke daily, both literally and figuratively.  Her fast-paced teaching style seemed like information overload at first, but I realize I would not have come as far as I have without it.  Under Shauna’s instruction, I’ve learned many more chords and (parts) of several songs.  I hope that by the time I start roadtrippin’, I’ll be adequate enough to try busking for lunch money on the streets.

Look how happy the uke makes this dude!

The second big, self-improving change is my membership in the Hawaii Fit Body Bootcamp led by former MMA fighter Egan Inoue.  It started with a great deal I found on Groupon.com: one month (a value of over $200) for just $35.  (Big sister Melanie would be upset if I didn’t mention it was she who introduced me to Groupon!)  When I saw this deal, I knew I had to buy it because of: 1) my lack of self-motivation for working out, 2) the workout dry spell I went through during November and December, prompted by reason 1, and 3) the fact I have nothing else to do in the mornings.

The one-hour classes are a mix of workouts that change everyday and include cardio, slow burn, kickboxing, and everything in between.  I go to the studio in Manoa Valley every morning there’s a class, which is everyday save Wednesdays and Sundays.  Saturdays are beach workouts open to the public.  You can watch a local news station interview with Egan during one of the beach workouts (that I didn’t attend) here. 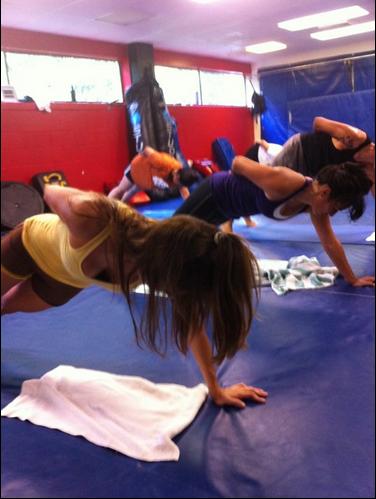 I decided to use this picture I found on the internet before even realizing I was (partially) in it. Though my head is cut off, my tattooed arm is visible.

I’ve definitely noticed a change.  My “winter insulation” is slowly disappearing, giving way to a bit of definition in the abs and arms.  My legs have always been strong, but never this solid.  Push ups are a lot easier, as is riding my bike in the highest gear.  And despite my attempts to save money, I paid for three more months after my Groupon deal ended; not only was I seeing a positive physical change, but also I like the people in the class too much not to keep going.  Now that I’m stronger–and paying more for the classes–I attend two classes a day.  If you want to join me, I have some $100 gift cards.

New haircuts are nice, but I take a lot more pride in my calloused fingertips (ukulele) and bruised knuckles (punching bags).

And now it’s time for the gratuitous (yet relevant) model picture: 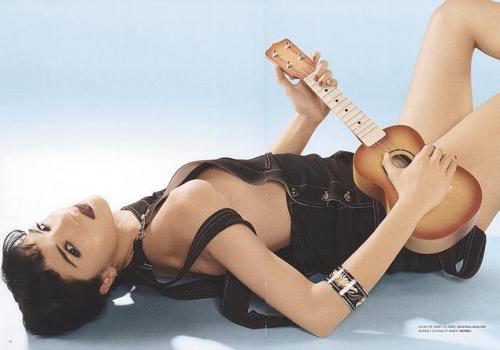 Not the regular Roxy model, but no complaints.