Young Man On The Road #14: How Do You Like Them Apples?

My hair was near shaggy by the time we left Ontario and rolled back into the States.  Dreading the East Coast humidity in front of me, I knew I needed to chop it off.  Besides, I have deluded myself many a time into thinking that I can grow out my hair, each time yielding the unfavorable Filipino ‘fro.  First order of business the next day would have to be finding a barbershop.  First order for that night?  Find Kristin’s house.

Kristin was one of my sister’s best friends growing up, pretty much making her another sister to me.   She left the Bay years ago for Boston, eventually making the suburb of Plainville her home.  Finding Plainville wasn’t a problem, considering we have three GPS devices on hand, but getting there on time got tricky.  Somehow, Ian and I both had it in our heads that Boston was about four hours from Toronto.  We each mapped out the route and independently concluded that our trip ahead was a meager afternoon drive.  However, sometime between packing up our stuff in Toronto and eating Buffalo wings near (but not in) Buffalo, New York, we discovered that our next destination was actually eight hours away.   We still don’t know how we were both so wrong.

Thankfully, Kristin and her boyfriend, Aaron, were still awake by the time we rolled up to their house near midnight.  They said they usually stay up until midnight anyways, which was probably true but could have been a lie to make us feel comfortable.  They excelled at that; not lying, making us feel comfortable.  They opened their whole kitchen to us, bought us breakfast food and snacks, made a list of suggested places, and told me the nearest place to get a haircut.  They seemed just as excited to host us as we were to be there.

Jerry’s barbershop was just down the road a few blocks.  I took off in the morning before Ian was fully awake (I have, on average, about three hours of time to fill before my counterpart is ready to move).  Jerry immediately knew I wasn’t a local.  The first thing he asked me when I strolled into his tiny, one-chair establishment was, “Where are you visiting from?”  His barbershop was a small room with wood-paneled walls plastered in aged photographs, knickknacks and magazines lining the counter, and a rabbit-eared television in the corner.  A couple old men strolled in after me, swapping fishing stories with their long-time barber and friend.  Sporting brown skin and sandals, I stuck out like a sore thumb.

At first, I just figured it was such a small community that it was obvious I was visiting; they’d never seen me before.  Later, while sharing a local brew with our college friend Meredith at Cheers, I learned that it might not have been my unfamiliar face but also my uncommon ethnicity that tipped them off.

Segue.  What was that?  Yes, that Cheers.  There are actually two in Boston: the “Original,” which served as the inspiration for the show and provided the establishing (outside) shot of the stairs, and the “Replica,” which has an interior designed after the set of the show.  We met up with Meredith at the former. 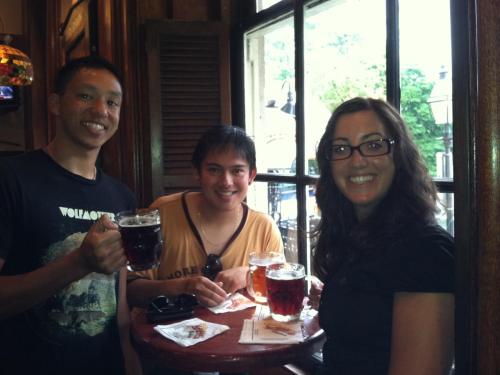 Where everybody knows your name. . .

Anyways, the three of us played catch up for a bit—“What are you doing now?” “When did you move?” “How do you like living in ____?”—and then Meredith laid down a piece of information that I saw but never noticed: for such a big city, Boston is pretty white.  That took me by surprise.  You’d think that a well-known American metropolis that grew around a major body of water would attract some immigrants.  What about the Irish and Italians?  Yes, they were the major immigrant groups in the 19th Century, but after a prerequisite period of persecution, they have fallen into the category of “white.”  It does not seem like any modern immigrant groups have shipped up to Boston lately.

I do not find that fact bothersome, but rather more of an anomaly.  And I am in no way suggesting the locals were rude or prejudice toward me because of race.  Jerry could not have cared less about the color of my skin and was eager to welcome me to the Boston area.  No, it wasn’t my race that caught him off guard, it was my alma mater.

“No, I finished college about two years ago,” I replied (I always intentionally use the word “college” so people don’t assume I just graduated high school.  It has happened.)

“. . .”  Jerry paused with amused shock as if he couldn’t believe that I’d admit to such an atrocity.  He continued, “In my day, that school was filled with a bunch of wackos.  I bet it still is.”

At that moment, I feared that the conservative, old, white guy with clippers in his hand was going to give me a straight up military buzz cut.  I did ask for it shaved on the sides and short on top, after all.

In trying to explain that Berkeley has opened up to more conservative types, too, I said, “Oh, actually, there’s now a place for everybody at the school.”

“Oh, I bet there is!”  Jerry said with a scoff.  He obviously took my statement the opposite way.  I could almost read his thoughts, I bet they let in illegal immigrants, and homosexuals, too!

But I digress.  It is wholly unfair for me to pin Jerry as homophobic.  I mean, he is definitely conservative, but I should not assume he is prejudice in any way.  Jerry is a kind and helpful man who immediately rattled off a laundry list of places to see and things to do.  He was excited to share Boston with me and even though he named many of the same places Kristin and Aaron suggested, I was grateful for his advice.

“You should definitely see that, uh, that American History Path, er, um, the Walk of History. . . Hey, Bob, what’s that thing called?”

“Oh yeah, the Freedom Trail.  Lots of great things to see on that.” 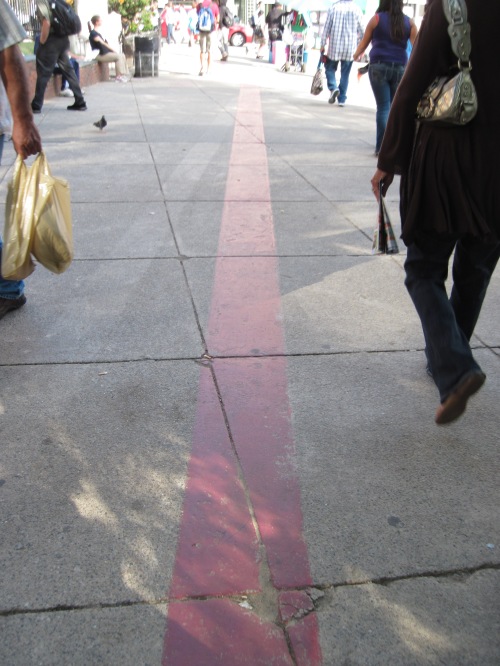 Freedom Trail: this painted line would alternate with a red brick path.

And he was right.  Ian and I spent most of our second day in Boston in awe of the places along the Freedom Trail, a literal line on the ground that leads you past many old, historically significant buildings and sites.  Being a history nerd, I was genuinely excited.  Ian brought up a good point in that while we would have been amused with such sights as kids, we are now old enough to understand and appreciate their significance.  That is why we are excited to see Washington, D.C. even though we both went on the 8th grade class trip (Damn, that was over a decade ago!).

Ian and I figured it would be a quick, 30-minute jaunt through the center of the city, but the Freedom Trail continued through the mafia-laden North End, across the Boston Harbor, and up Bunker Hill.  Our “jaunt” turned into a two-and-a-half hour trek, but it was well worth it.  Notable sights include: the State House (whose golden dome was a prominent symbol in The Departed), Old South Meeting Hall (where colonists debated British rule), Quincy Market (a bustling tourist trap of food, commerce, and musical acts), the Bell in Hand Tavern (oldest tavern in the country), freakin’ Paul Revere’s house (no parenthetical explanation needed), and the USS Constitution a.k.a. “Old Ironside.”  Also notable: the cool yet sunny afternoon weather, a far cry from the torrential downpour that greeted us on our first day.

“Old Ironside, oh yes, you gotta see Old Ironside,” said Jerry, “Also, if you go all the way down that road, you can see Plymouth Rock where the pilgrims landed.  They have those ships, too, the Nina. . . the Maria. . . the Santa—hey Bob, what are those ships called?

“The Nina, the Pinta, and the Santa Maria.”

Actually, I couldn’t.  Those were the ships Christopher Columbus used to sail from Spain to a tiny island in the Bahamas. . . over a century before the pilgrims landed in New England.  What Jerry meant to say is that we should see the Mayflower in Plymouth, Massachusetts.  And we did.

Plymouth was a quaint little town with a ton of historical significance.  Nicknamed “America’s Home Town,” Plymouth’s rolling hills sport old white houses (the first in the country) that overlook a calm bay split by a rock wall and littered with sailboats; a typical New England town.  We did not see the Mayflower, but rather a replica called the Mayflower II, which, according to historians, is as accurate a replica as they could make.  Just down the coast from the ship was a Greek-like gazebo structure with columns.  It was put in place to protect Plymouth Rock.  Yes, the Plymouth Rock.  This shocked me for two reasons: 1) it was kinda small, but after four centuries of parading it around you’d expect such wear; and 2) I was not aware that it was literally a rock.  I figured “Plymouth Rock” was some symbolic point, a nondescript general area at which the Pilgrims landed.  If anything, it was a point of land that jutted out into the sea.  But an actual, tangible rock?  Well, don’t I feel sheepish.

The Guide and the Rock

The park official that gave the half-hourly history of the rock was one of the best guides I’d ever encountered.  She was a small, old woman with a huge personality who passionately told the story of the rock in an excited tone, not unlike one uses to read stories to a child.  And she did it all with an old, Bostonian accent.  It seems like a difficult job to tell an engaging story about a rock, but she was up to the task.

If I really like the place, I’ll come back for way more than three weeks, I thought.  Part of the trip for me was scouting out my next quarter-life crisis move.  Before the trip, I was set to move to Seattle, but I’ve since rejected the notion because I already know what a west coast city feels like.  I could easily assimilate.  I don’t want easy, I don’t want the same.  I want a city with a subculture and lifestyle of its own, that I’d have to adapt to, and I figured Boston would be it.  I’ve heard it heralded as the San Francisco of the East Coast.  What that means, I didn’t know and still don’t.  Boston definitely has its own style, and I dig that.  There’s a lot of history, old immigrant culture, and pride among the natives.  But it also lacks a lot, too.  It lacks diversity, forward thinking, and a transplant population (as in, the people who live there were born there).  I love how Boston celebrates its past, but I don’t see a future there for me.

With a fresh new ‘do, I thanked Jerry, tipped him well, and left.